Lot's of BMW owners are familiar with the 'GPS' plug, the connector that provide switched power and is installed on nearly every BMW for the last 15 years.
The plug is usually positioned at or near the steering stem. It's a three pin plug, of which 99% of us use pin #1 and #3, that offers GND and +12V and is switched on and off by the ignition. Pin #2 is usually ignored. Until now...

The #2 pin offers a signal that gives 6 1ms pulses for each turn on the rear wheel. The pulse is in open state high, and the 1ms pulse is an active GND pulse.
My guess is that the pulse is used for the Navigator GPS and offers a distance/speed signal to the GPS when there is no GPS signal (tunnels, driving close to tall buildings etc.)

In 2012 I got involved in a case where a handicapped girl wanted to start riding bikes again after an accident. She wanted a two-wheel bike, and this fellow in Germany built what she was looking for.
https://www.koeltgen.de/index.php?id=motorradumbau . 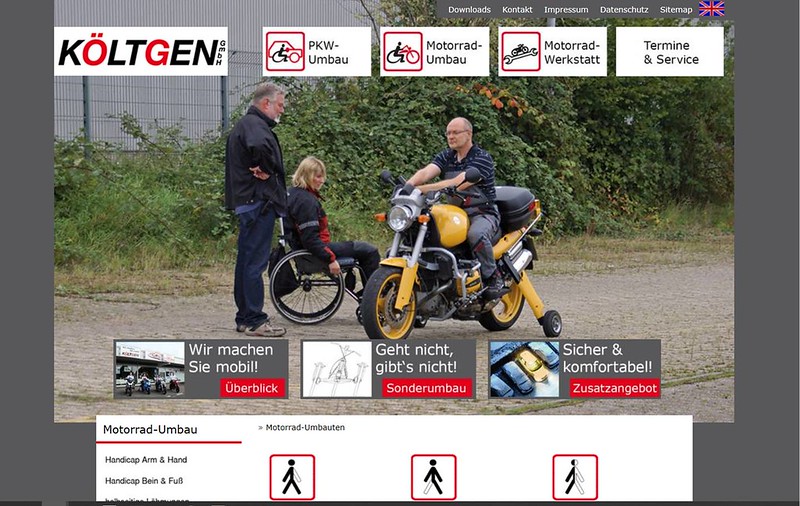 She bought the bike, which was already TÛV approved (a R1200R, not the bike in picture above), but when she wanted Norwegian plates on it, the feds wanted some extra protection to secure that the wheels would not extend during riding at high speed.

This is the control panel that extends/retracts the wheel. 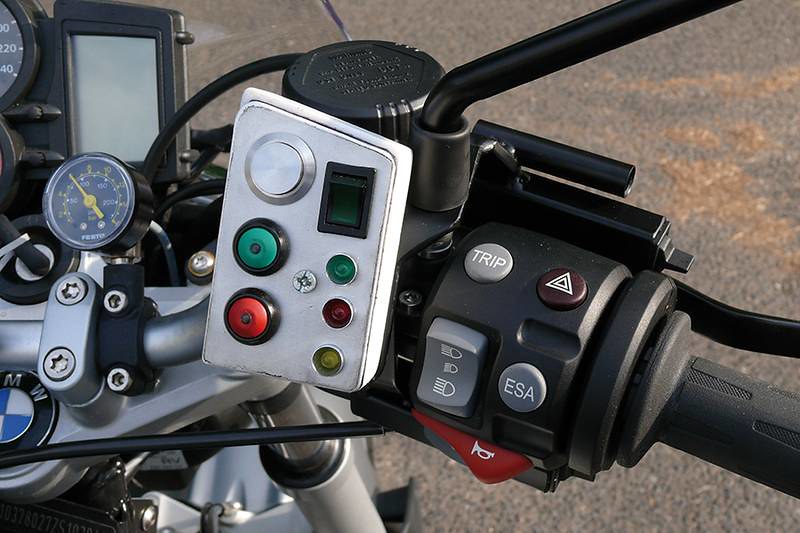 I will not debate the need to modify an already TÛV approved bike, let's just say she needed the extra security device in order to get plates on the bike, take it or leave it.

The demand was for a device that would deactivate the extension command when driving faster than a given speed.
The chosen solution was to pick up the signal from the #2 pin in the GPSplug on her 2007 - R1200R and program a PIC (small one-chip computer) that would control a relay, and this relay would be inserted on the cable carrying the signal from the control switch at the handlebar to the actuator built into the dedicated top box at the rear of the bike.

For testing the operation of the device, I built a small testbox with LEDs that would operate the relay command, and mounted it on my current bike at the time, a K1300GT. 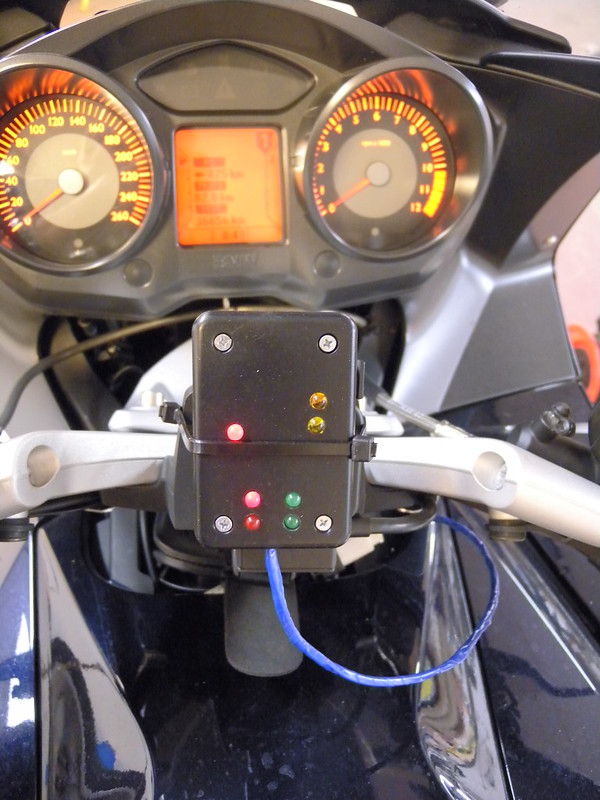 In addition to the required blockage of the extension signal (at 15km/h) I also added some extra relays that would block the wheels from being retracted at standstill, automatic retraction of the wheels if exceeding 20km/h and emergency extension during hard braking to stop (Due to reduced control of her legs, all her balance support would be by using the hands on the steering, and if braking hard, all her power would be to holding on to the bike, blocking the ability to activate the extension of the wheels before the bike stopped).

After a periode of testing, this is what we ended up with. 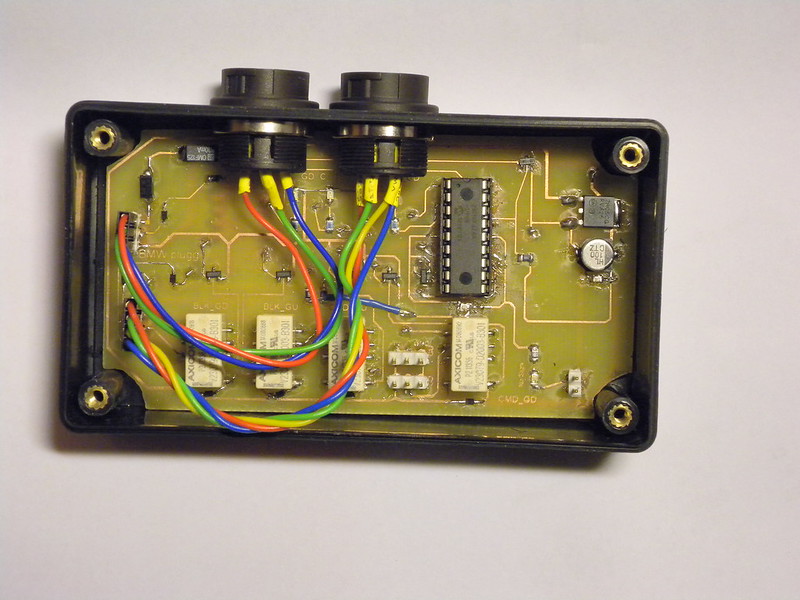 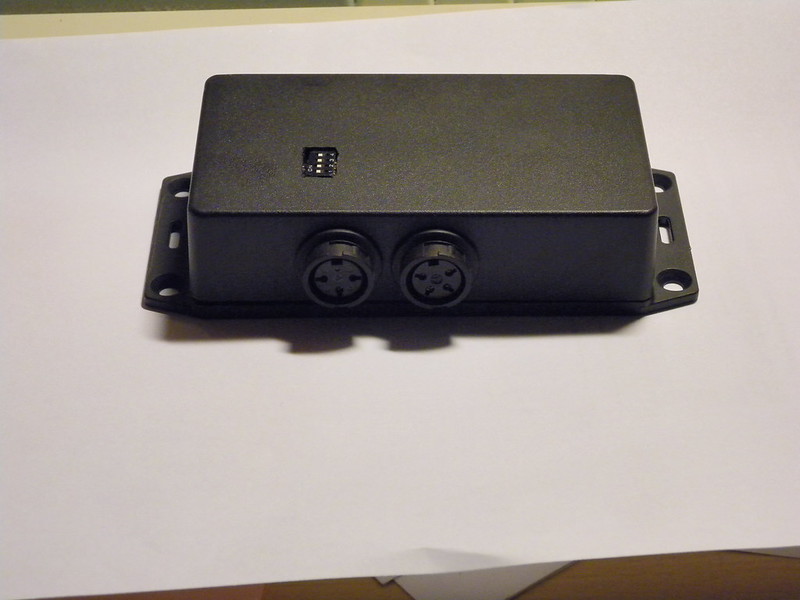 The box was installed inside the topbox containing the wheelcontrol. Power to the box was taken from the GPS plug, so for once, all three pins in the GPS plug where used. On top of the box there where installed 4 DIP switches that would activate/deactivate the protection modes, of which two of them, auto extension and blocking retraction at standstil would need to be deactivated when servicing the bike.

My writeup here is merely to fuel the imagination to what we may use the #2 pin signal.
However, if anyone knows a person to which such a device would become useful, I would be happy to build a box.
The entire project was done as a none profit help to a person in need.
Top

You remind me of see below.

Well, if you can keep a secret, I'm currently working on improving the accuracy for this project

Return to “KNUT CORNER THE MACGYVER”